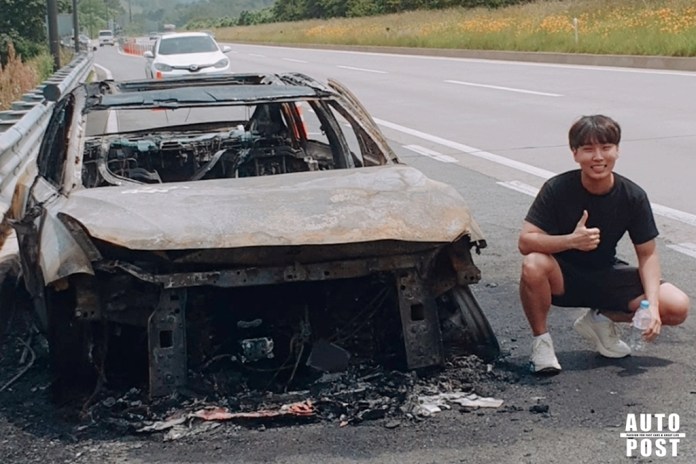 Several fire incidents about Hyundai’s best seller sedan, the Grandeur, have created some noise overseas but today we want to inquire about to Hyundai Grandeur defects that have made customers to join together and claim to Hyundai, from little things like a dashboard assembly defect to something more worrying like 2.5-liter engine oil leak that could be the cause of the recently fire of the Grandeur pictured above.

While Hyundai Motor’s best-selling ‘The New Grandeur’ has recorded the highest sales volume of the domestic market, the issue of defects in the 2.5 gasoline model has not stopped. Previously, defects such as engine vibration of Hyundai’s luxury brand Genesis ‘GV80’, the fire of ‘New G80’, and some other defects, for example in the new Elantra (we will talk more about this in a few days) raised, defects in the new Grandeur continue to occur.

Recently, there have been numerous postings on some Grandeur-related forums or Cafe’s stating that the new Grandeur is showing signs of defects such as poor coating, step difference, dashboard assembly failure, and headlamp peeling. In particular, serious engine oil reduction problems and even fires have occurred, leading to national petitions related to defects of the new Grandeur.

According to the owners, there was a problem that the engine oil, which had been full after the new vehicle was shipped, dropped to less than half after driving only about 1,000 km. In addition, consumers are complaining that Hyundai Motor Service Center has not solved the fatal defect at all.

Borrowers with problems are in the process of upgrading software and filling up engine oil, and checking engine oil after engine sealing. In addition, the new Grandeur continues to suffer from problems such as poor painting, poor dashboard assembly, between others.

According to one club owner, after receiving a long wait of 3 months since have he signed the contract, the car was rejected because it was found to have defective paint, and afterwards, it was requested that the new car be thoroughly inspected. The owner of the car had a gap between the windshield of the driver’s seat and the dashboard, and the gap was wide enough to fit his fingers. Also, the interior material (sponge) that catches the noise was revealed, so it was visible.

In particular, the failure of assembly of the crash pad showed that various owners were experiencing the same symptoms, and consumers experienced the same problem in vehicles that did not select the ‘Head Up Display (HUD)’ option.

The petition published on the 5th of the past 5 days has been agreed to by 1,879 people, and Grandeur’s owners are requesting Hyundai Motor Company’s sincere response. One petitioner said, “We will clear up the defects of more than 60,000 units sold in Korea.” However, even though there were various minor defects from serious defects, only the answers that said ‘it is normal’ and ‘we are looking internally’ have returned.

He added, “Please help the people to protect their property from the tyranny of companies in a monopolistic position so that they can investigate these matters and receive proper repairs.”

The new Grandeur defects currently published in Cheongwon include the oil reduction problem of the 2.5 Smart Stream engine, the noise generated by the steering system (frog sound) and magnetization, and the paint peeling off the area where the headlights and bumpers come in contact with each other. There are a total of 5 cases, such as the phenomenon of ‘glazed’, where the car’s glass trembles and makes a sound, and a shift shock occurs due to a mission defect.

When the defect issue of the new Grandeur became serious, the government reportedly started a preliminary investigation. An official from Hyundai Motor said, “We are aware of the engine oil reduction problem of the Grandeur 2.5 gasoline model being raised by various clubs. Is going on. After that, if accurate results are obtained, we will prepare measures and announce them officially.”