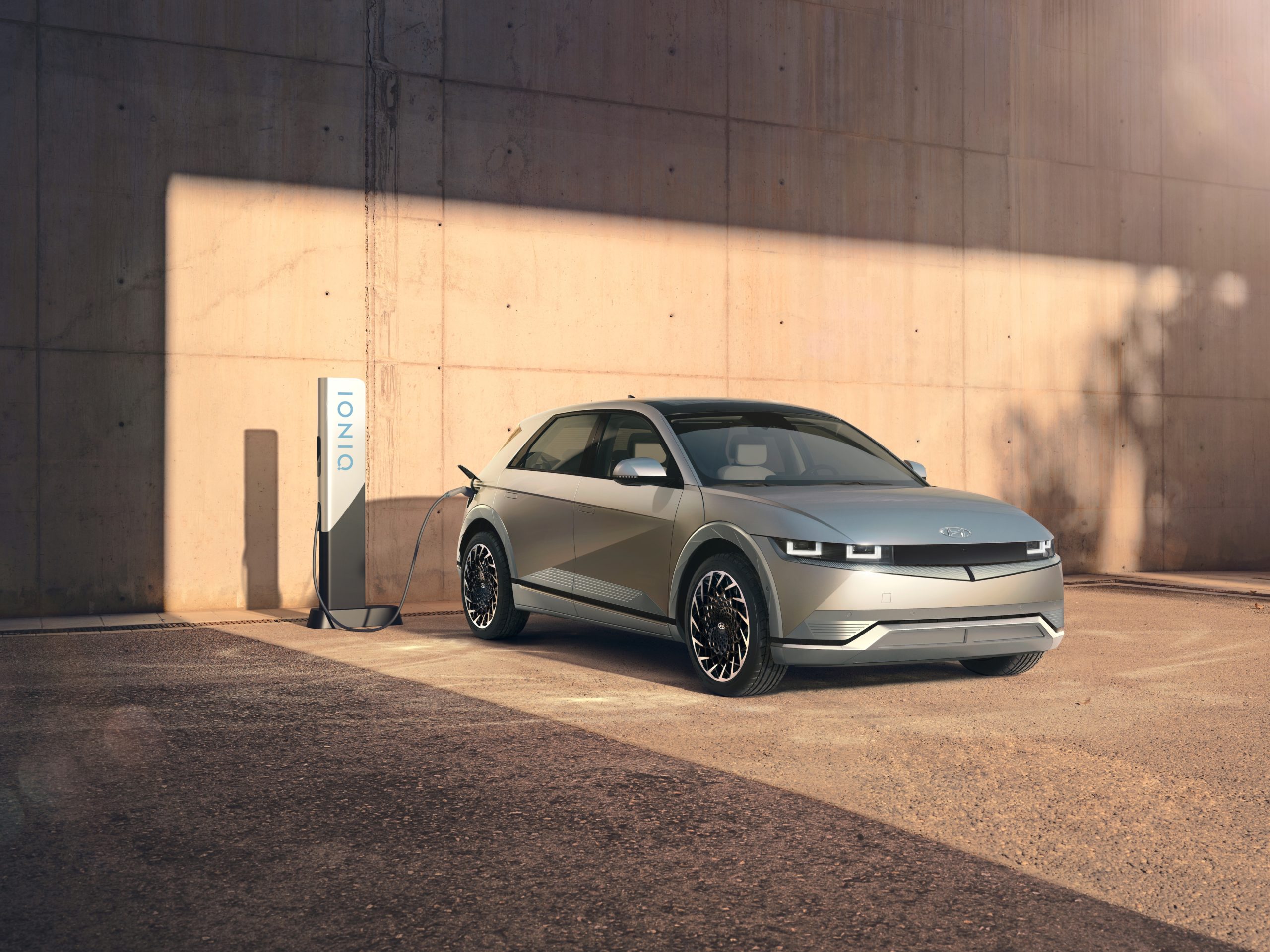 Hyundai launched its first crossover electric vehicle, the IONIQ 5, on an all-new dedicated EV platform today in a global livestream event. The car’s E-GMP (Electric Global Modular Platform) platform is designed to underpin other models in the future.

The IONIQ 5 offers optional 4WD with a 155-kW rear motor and a 70-kW front motor, boasts 298 miles of range, and boasts a 0-60 time of 5.2 seconds. Even more impressively, fast charging via a 350kW charger can take the IONIQ 5’s 72.6-kWH battery to 80% charge in just 18 minutes, or over 60 miles range in just 5 minutes. A solar roof is also available which helps to generate more power that can be used to prevent discharge, increase range, or power the electronics of the car when parked.

If you opt for the 2WD version of the car, you’ll find a single 160-kW electric motor that drives the rear wheels and gets to 60mph in a more leisurely 7.4 seconds. There’s also a smaller 58-kWH battery that has less range (range in the 58-kWH version not yet available) and 0-60 times of 6.2 seconds for the 4WD variant and 8.5 seconds for the 2WD.

Featuring a 118” wheelbase, the IONIQ 5 is longer than the Hyundai Palisade, and even longer than that of the Tesla Model X. This length, along with the placement of the batteries low on the floor and the two electric motors at either end of the car, has been put to use to maximize interior volume. With a fully flat floor, the IONIQ 5 allows passengers to configure the interior in any way they like, not only including sliding and reclining seats for all passengers, but also a sliding center console called “Universal Island” with built-in wireless phone charging. Owners can save their interior configurations to easily transform the interior to their liking at any time with a mix of electronic and manual adjustments. The interior also features recycled and eco-friendly materials such as recycled bottles and plant-based yarn throughout. There are four interior color combinations available, including black, gray, teal, and brown.

In the front seats, drivers and passengers are greeted by dual 12” screens, one for the gauge cluster and one for infotainment. Additionally, there’s an available large augmented reality heads up display that goes a long way to making the windshield yet another virtual display for the driver. The dashboard is modern and airy, a large departure from other Hyundai products. For models without the solar roof, an available single glass panel with no central support beams increases the atmospheric feeling. In the back seat, which features a large amount of legroom and headroom, there’s also a high-powered charge point called V2L that you can use to plug in everything from small electronic devices to camping equipment to household appliances. This allows the IONIQ 5 to not only use its batteries for driving, but also for powering equipment outside the car.

Hyundai has also developed new semi-autonomous driving features for the IONIQ 5 and provided the latest hardware in the form of cameras, sensors, and radar, to bring IONIQ 5 drivers not only smart cruise control features, but also automatic slowing for corners, automatic lane change capability, automatic parking functions for parallel parking and diagonal parking, including the ability to park the car automatically from outside the car, in both parallel and perpendicular parking situations. Hyundai also showed off side-view mirror-replacing cameras that come with high-resolution displays for both the driver and passenger door which take the place of the traditional mirrors. It’s unlikely that feature will be approved for use in the US market any time soon.

Exterior styling for the IONIQ 5 is based on the Hyundai 45 concept car, which celebrates the company’s 45 years of history. It’s a look that successfully blends retro and futuristic design, featuring straight-edged rectangles and triangles throughout the design, as well as pixelated graphics in the daytime running lights and rear brake lights, and intricate angular designs across the bodywork trim and the aerodynamic 20” wheels. Extra care was taken to minimize panel gaps on the IONIQ 5, including a unique clamshell hood, which also contains a very small front trunk (just over 2 cubic feet). Door handles are flush with the bodywork, only extending when needed to open the doors from the outside.

The IONIQ 5 is truly a revolutionary vehicle for Hyundai. It’s a worthy competitor to established crossover EVs, and offers some unique features unavailable in any other car on the market. Hyundai also says that the E-GMP platform will be used for an upcoming IONIQ 6 electric sedan, most likely based on the Prophecy concept car, and an IONIQ 7 large electric SUV. We can’t wait to see what’s in store for Hyundai as they invest more into electric vehicles.