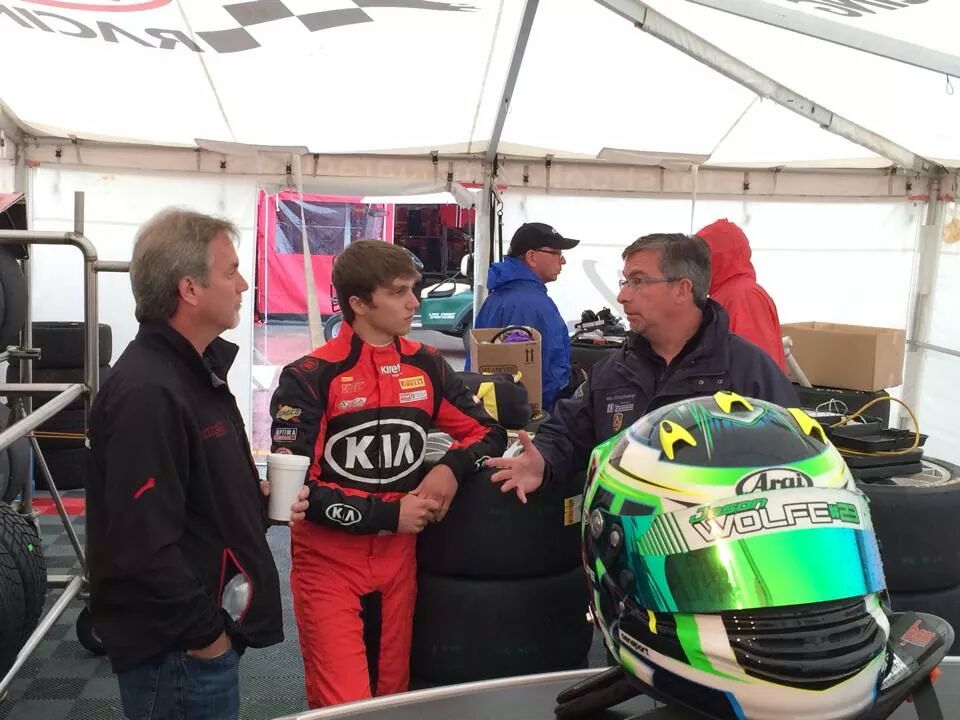 Due to some engine damage in New Jersey our friend Russell Smith was not able to compete on these 2 rounds but he should be back for the next race.

For Friday morning, the city of Elkhart Lake woke up with some rain for qualifying day. Jason Wolfe No. 36 Wolfe Trucking Kia Forte Koup was able to get the fastest lap with 2:59.502 position him first on the grid but for GTS class PWC decided to canceled qualifying due to bad weather and grid will be establish based on drivers championship points positioning Wilkins at 2nd and Jönsson in 4th. 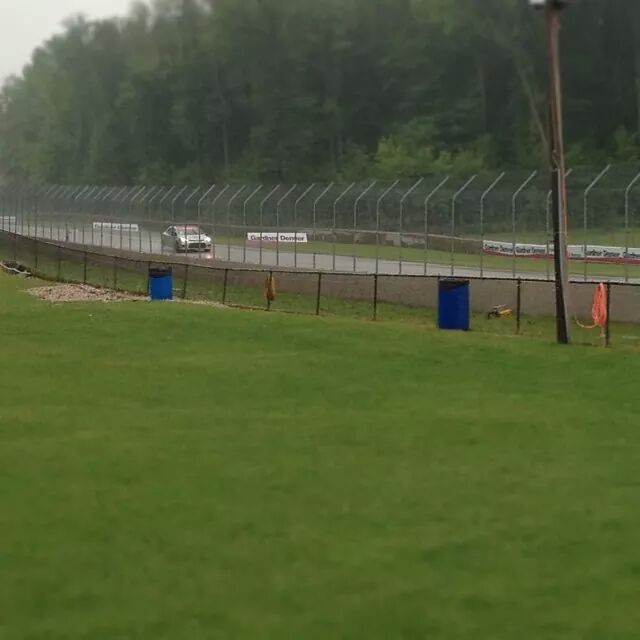 Round 7 started with TC-A class, Jason Wolfe unfortunately went off course into the gravel at turn 1 with his Koup. We talked to Jason and he told us “…the abs kept failing and I would lose brakes but we got it figured out.” Jason also mentioned “A few clips broke on the box and it had a bad connection so it would work sometimes then other times it wouldn’t…”. Unfortunately because of those problems he ended last on this round. 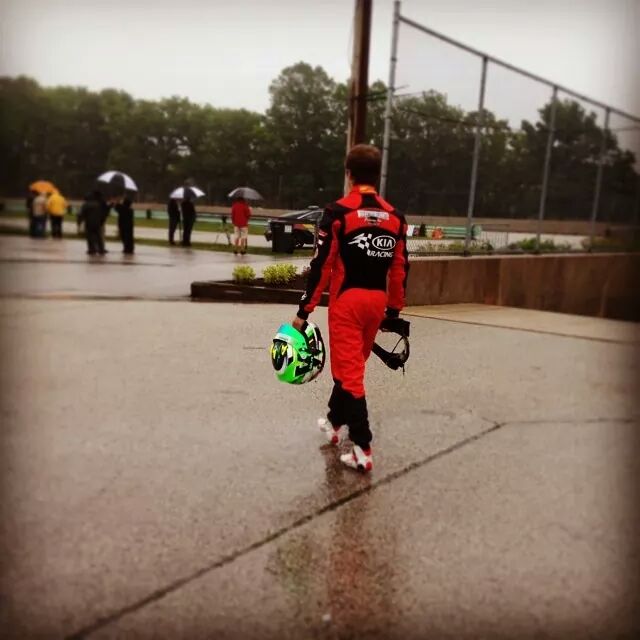 Next we have GTS class, the pair of Kia Racing/Kinetic Motorsports Optimas had the measure of the field all race. Despite starting fourth, Jonsson, in the No. 36 DonorsChoose.org Kia Optima made a fantastic start to move into the lead by the end of the first flying lap. He was able to control the race from there to win by 9.093 seconds.

“Coming to 2, Mark (Wilkins) got hung up and I got a really good run down to 3, to get inside from there,” Jonsson said. “I just had to keep it clean and made sure the GT cars got through safely.” 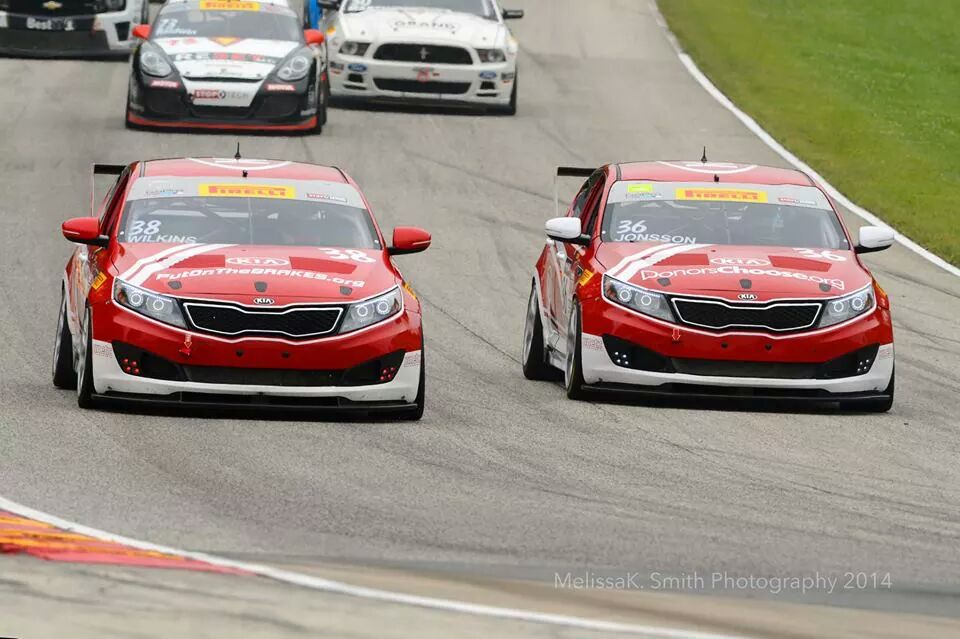 Teammate Mark Wilkins, of Toronto, finished second in the No. 38 PutOnTheBrakes.org Kia Optima to complete the Kia 1-2, the manufacturer’s first such achievement this season. Kia had a 1-3 finish when Jonsson won at Long Beach.

Wilkins started second and survived a possible late moment to end in the same position. Unofficially, he’ll move into the GTS points lead. 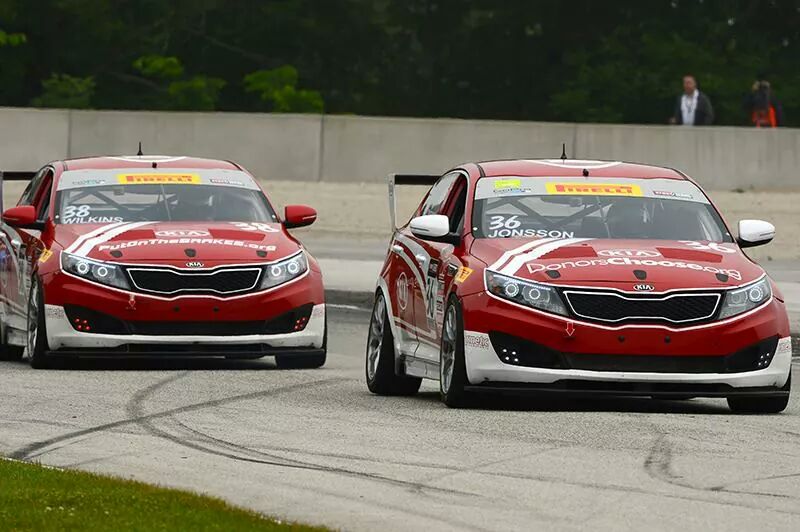 “We had something going on, marble pickup or something unusual,” Wilkins said. “When you want the 1-2, had to make sure we got around. Backed off to save the tire to get to the end. We’ll get it sorted.” 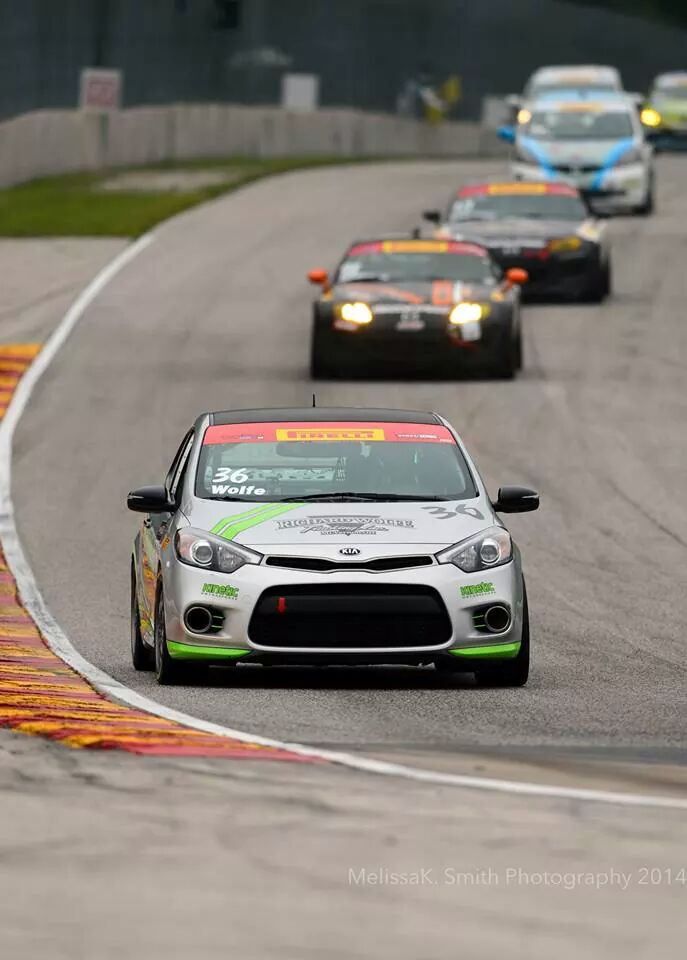 For the last race of the day, TCA class was quite eventful and featured a three-way battle for the lead. Ultimately it was Wolfe, in the No. 36 Wolfe Trucking Kia Forte Koup, who held on for his third win of the season after three official lead changes between he and fellow first-year driver Jason Cherry. As he held on, Wolfe took home the StopTech Brake Late, Finish First award. 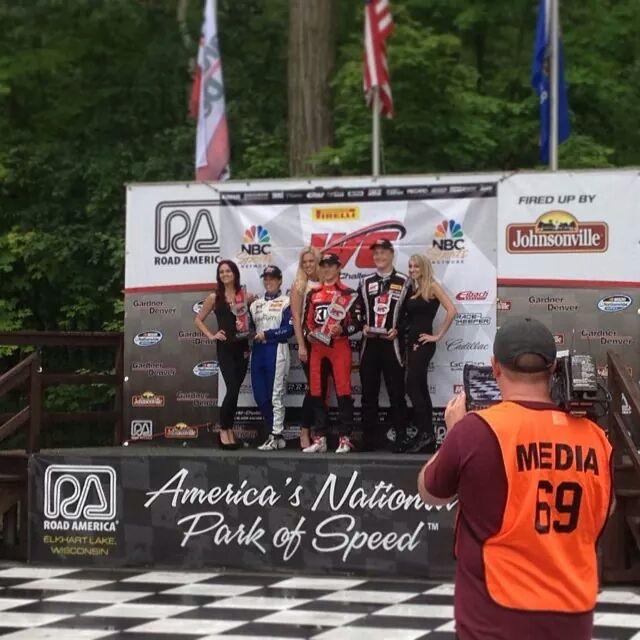 “It was totally back-and-forth; (Jason Cherry) was better in some areas, I was better in others,” Wolfe said. “It was a battle of race techniques.” 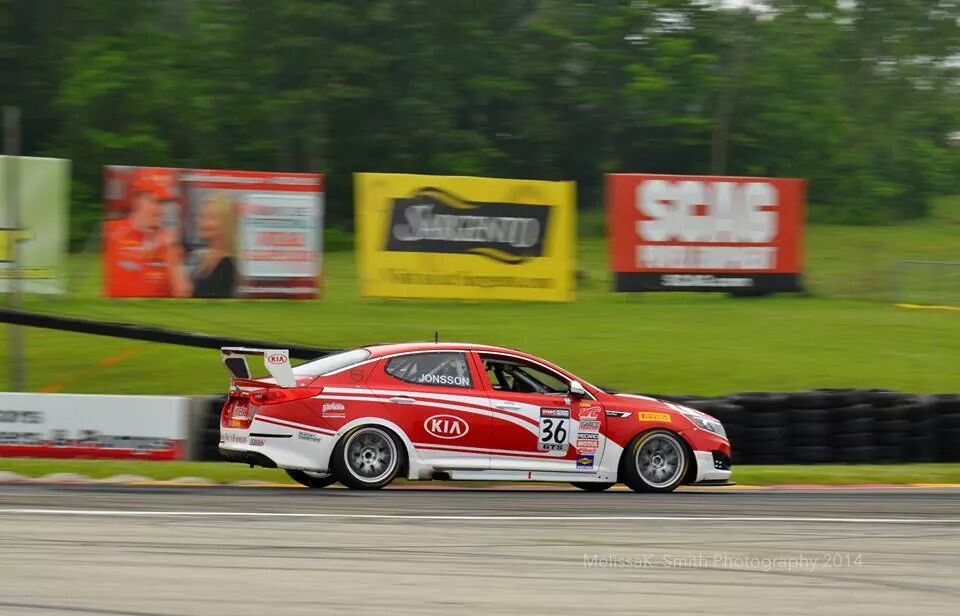 Round 8 for the GTS class started at 9am and the race was fairly straightforward with Jonsson, of Buford, Ga., able to control the race in the No. 36 DonorsChoose.org Kia Optima for Kia Racing/Kinetic Motorsports. He led all 16 laps in route to his third win of the season, with a winning margin of victory of 1.019 seconds.

“Working hard pays off, and my Kia Optima showed full performance this weekend,” said Jonsson. “It’s a nice bounce back after Detroit for the points.”

Unfortunately Mark Wilkins only made it to position 7th on the GTS class.

This was another great weekend for the Kia Racing team, even tho they had some problems on their Kias they still have a good position on the board. 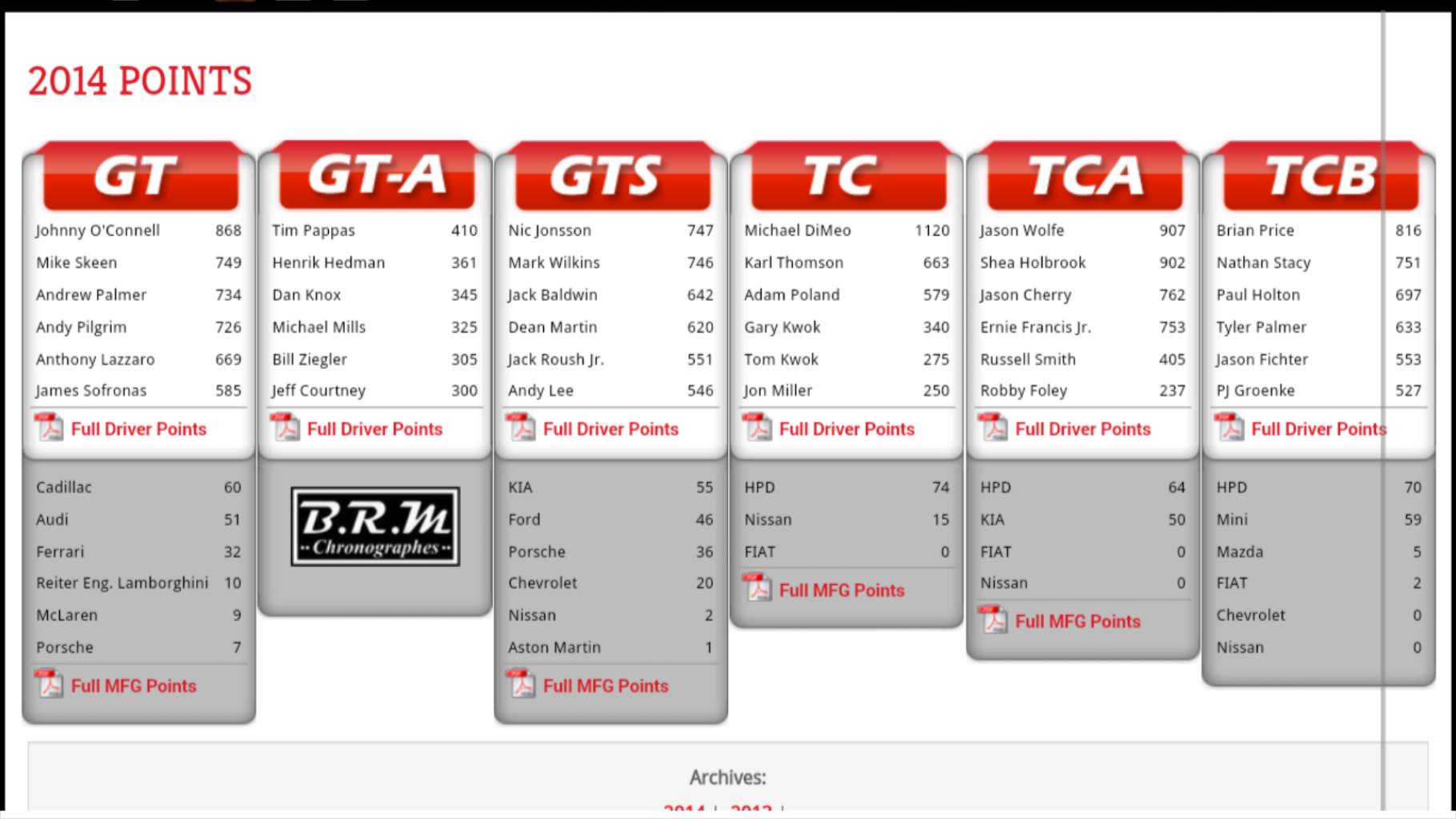 For the GTS championship, Nic Jönsson is holding the first place with 747 points and Mark Wilkins is right after him with 746 points keeping Kia in Manufacturing in first position with 55 points. Next is the TC-A championship, Jason Wolfe (read our interview with him) is still holding his first place with 907 points but Kia stepped down to 2nd place on Manufacturing with 50 points.